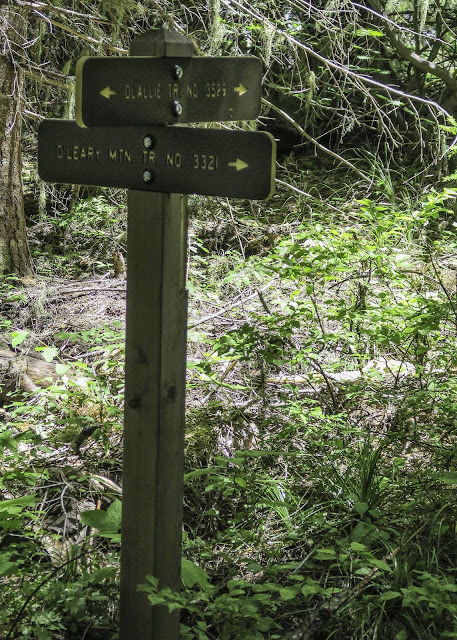 Although I’ve already done a write-up on the O’Leary Trail (here), a lot of work has gone into revitalizing the trail, which provides a little different experience from my original write-up. What was once an overgrown piece of singletrack that was hard to find in spots as been transformed into a much more legitimate trail, and that will certainly have an impact on its popularity. Although the trail did lose some of its rugged nature, it still feels like an adventure ride that’s a bit off the beaten path. Furthermore, when I did my previous post it didn’t include the Olallie Trail climb, which has helped to solidify it as a true IMBA Epic. With that said, let’s get started.

When I saw the email invite for this ride I was immediately on board. I’d had done it a few times before, and although I knew it was savage and had you questioning your decision to ride it during the climb, I also knew that it was extremely rewarding and probably my favorite type of XC riding. The morning of the ride, Emily and I left Eugene around 9am, meeting the rest of the crew where we’d start the ride, at the Blue Sky Market in Blue River (OR). After a quick meet and greet we saddled up and started the ~8 mile road ride to the start of the Olallie Trail.

The weather was just about perfect as we pedaled east on King Road, and were we were treated to some really nice views of the Three Sisters looming in the distance. My legs and lungs were feeling great, but I had to remind myself to take it easy and pace myself, since we’d have nearly 6,000’ of climbing piled on over the next 25+ miles. Once King Road tee’d into Horse Creek Rd. we made a right and traveled a short distance before turning right again onto NF-1993. Over the next 3 miles the road climbed around 1,000’ until we reached the gate and the Olallie trailhead, where the real suffering would begin.

Almost immediately the trail began its ascent up the ridge, with a sustained pitch that wouldn't let up for the next three miles. Based on a solid layer of evergreen needles and cones, it’s obvious that this trail doesn’t get the traffic that the more popular trails in the area do (e.g. the MRT and King Castle), which only added to the difficulty of the climb. I’d be lying if I said that I climbed the whole thing without resting; in actuality, I had to stop frequently to bring my heart rate down and even pushed my bike up more than a few sections. From these statements you’re probably wondering why I even like riding this trail… Well, for one it’s beautiful, and for another, it’s good to have your ass kicked every now and again.


A little more than halfway up Ollalie it became even more beautiful, with a blanket of bright green clover lining both sides of the trail. Although the switchbacks were behind us, the climb was far from over and did its best to overshadow the amazing setting. By the time we reached the intersection with the O’Leary Trail, we were all pretty beat down but encouraged that we had just knocked out two-thirds of the climbing.


Now on the O’Leary Trail, the work that had been done to it became immediately apparent. Going from what was essentially bushwhacking near the start of the trail had been replaced with brushed and widened singletrack. The previous times riding this section, my full attention was spent ensuring that my front wheel didn’t fall into any holes or plow into any hidden rocks. This time I was able to actually enjoy the views as we traveled through the meadows that lined O’Leary Ridge. I was also happy to see that the trail wasn’t completely manicured and that it struck a good balance between bike friendly singletrack and an unpolished adventure ride.


As the trail alternated between small meadows and evergreen forest it climbed and descended in short fits until we reached the curse-worthy push-a-bike section up Macduff Mountain. After climbing for around a half mile and 400 vertical feet we topped out on the ridge, where a short hike up the side of the hill brought us to the summit and a nice place to take a lunch break. The vista atop Macduff certainly didn't disappoint, with amazing views of the Three Sisters, Mount Washington and Mount Jefferson.


From Macduff, the trail started its 5 mile descent down the ridge and toward Cougar Reservoir. The first half of the descent was a bit pedally. It also traveled along some sections of impressive rock wall, built by the Civilian Conservation Corps (CCC) back in the late 30s. The trail soon dumped out onto a gravel road, which we traveled along for about ¾ of a mile before jumping back on the O’Leary trail.


On the other side of the road, the trail headed down at a more rapid pace, with lots of new reroutes along the way. It became a little confusing at some of the offshoots, since neither the old or new trail was blocked off, creating a choose your own adventure type of ride. It was actually kinda fun and comical on some sections of the trail, where half our crew would take a different route than the other, not knowing who was going to come out ahead. I have to say that I do prefer some of the older sections, which has lots of steep switchbacks and pitches, perfect for challenging your braking and balance skills. However, from an erosion standpoint I understand why the reroutes are necessary and I look forward to seeing them in their completed state.

At the bottom of the descent, the trail crossed a small road, traveled a short distance, and tee’d into the Castle Rock Trail. Turning right on Castle Rock, the trail traveled 2 ½ miles in a northeast direction. This section of the ride is akin to many of the river trails in Oregon, relatively flat with short climbs and descents thrown in here and there. This isn’t my preferred type of riding and I was somewhat happy when it ended at O’Leary Road, which we’d use to access the King-Castle Trail.

During my previous O’Leary rides I didn’t have the legs or lungs to climb up for the full King Castle descent, and I've always regretted not doing so. Even though I was certainly tired this time as well, I really wanted to challenge myself, especially since I had all of the next day to recover. The only other person in the crew that was interested in the extra-credit was Emily, so after reaching the lower section of King Castle, we bid our companions a farewell and continued up the road.

The ride up the road wasn’t nearly as bad as I was expecting, which I attribute more to it being shaded than my energy level – on almost all of my King Castle rides this road has been directly in line with the sun and would beat me down pretty good. Eventually the road dead-ended at the upper trailhead, where we stated our climb up to the summit of Castle Rock. This part was definitely not easier than the other times I’d done it, and lactic acid buildup in my quads was reaching its threshold. For the final series of switchbacks to the top I didn’t even pretend to attempt them and pretty much walked my bike up the entire way. When we finally reached the summit I was both elated and exhausted. We spent only a few minutes taking in the view before hiking down to our bikes and starting the much deserved descent.

In my tired state I wanted to concentrate on the riding, so I didn’t take any photo documentation of our descent. That said, the King Castle Trail provides one of my favorite downhills in all of Oregon. The top half is filled with challenging switchbacks & zippy traverses, and the bottom half takes the form of a natural flow trail. For a trip report of King Castle prior to the middle re-route, go here.

Unfortunately, I botched a few of the tight left-hand switchies up top, but soon found more of a rhythm as we got into the trail a bit. Emily, who seemed to have as much energy was when we started the ride, was killin’ it, bagging almost all of them along the way. Once we reached the bottom section of King Castle, we jumped on the new section of trail that cuts out the old double-track you had to ride. I must say, this is one of the best reroutes I've ridden, and truly a testament to the hard work and creativity of everyone that worked on it – thank you so much! Although it’s not completely bedded down it rides extremely well, and appeared to be well armored for lots of use and low maintenance. It also seamlessly transitioned back into the old trail, and if you didn’t know better you’d never know they were ever separate trails.

Of course the lower/original section of King Castle didn’t disappoint either, with its breakneck speed straightaways and banked turns that both enter and exit perfectly. I only wish I would have had the legs to fully enjoy it and to keep up with my wife. By the time I got to the bottom, I was ready to be done with the ride.

A short spin on paved road brought us back to our awaiting car, where I admired the stats on my GPS, before saving my tracks and turning it off. I’m super happy that I forced myself to climb up for King Castle, although I certainly needed all of Sunday to recover from the experience.

Conclusion:
With the ever-growing list of IMBA Epics, to me it’s feeling a little bit like everyone gets a trophy. In my opinion an “epic” should be reserved for long, difficult rides that leave you questioning your decision during the ride and feeling highly rewarded afterward. As an example, although Black Rock (OR) is an amazing freeride area and one of my favorite places to ride, I don’t feel it belongs on the list. That said, IMBA did get it right with the O’Leary Trail, assuming you do the whole ride as a loop and include the Ollalie Trail climb and at least the bottom half of the King Castle Trail.

Be assured, this ride will take you through classic Oregon wildness – Wildflower adorned meadows, evergreen forests and some amazing vistas that look out onto the Cascades. It you’ve traveled here to ride the famed McKenzie River Trail (MRT), make sure you hit this one as well – it’s well worth the effort. In fact, I would strongly recommend this over the MRT on the weekends. Although the MRT is an absolute classic, it’s unbelievably crowded on the weekends and almost unrideable between Tamolitch (Blue) Pool & Trail Bridge Reservoir, due to the amount of hikers that you must yield to. One final bit of advice, if you plan on riding the O’Leary Epic, also plan for a rest day afterward, unless you’re an endurance rider and/or have a masochistic bend.

The tracks from our ride: