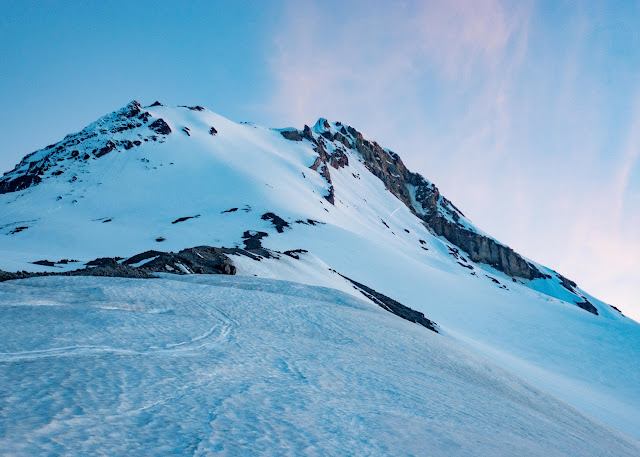 With another cycle of nice weather during the week and wet weather on the weekend, I got the okay for taking off work on Friday to get in a tour. While skiing the north bowls on Mount McLoughlin the week before (trip report here), Andrew and I had discussed skiing the Newton/Clark Headwall on Mount Hood, which happens to be one of the “50 Classic Ski Descents of North America”. Since he was also able to get the day off of work, we decided to give this classic line a go for ourselves.

Since the weather was supposed to be really warm the night before as well as the day of, we knew we needed to get an alpine start. Therefore; we drove up on Thursday night and camped out near the start of the tour. Unfortunately, when we got to the road that led up to Mount Hood Meadows, we found that it was roped off, only allowing access to authorized vehicles. We checked online to see what was going on and found that it was still closed due to the COVID pandemic, but was scheduled to reopen the following morning. To make a long story, we found a place to camp and hoped we wouldn't be hassled as we started the tour at 2:30am.

After getting a few hours of sleep, we woke up and made some final gear preparations before hiking up the road toward Mount Hood Meadows. We started up the runs that are serviced by the Vista Express lift. Not far up we were able to start skinning, which made our approach much easier. As we skinned up the resort, we were treated to a lightning display toward the east and howls from a pack of coyotes toward the north. By the time we reached the top of Cascade Express, ambient light started to take over the darkness.


It wasn’t until after we were above Mount Hood Meadows and partway up the southeast ridge that the sun rose above the horizon, projecting a pinkish glow on the east face of Mount Hood -- this has always been one of my favorite moments during Spring volcano season! Now with a luminous view of the entire east face, we could see that the Newton/Clark Headwall had quite a bit of ice fall debris, debris trenches, and even a couple avalanche crowns from a recent slide(s). In contrast, the Wy’east face looked like it was in amazing shape, which I assumed was due to the lack of rock formations and steep slope angle that were much more predominant on the Newton/Clark Headwall. It was at this point that we pretty much gave up on the idea of skiing the N/C Headwall and assumed we’d probably be descending the Wy’east Face instead -- basically, based on the steepness and exposure of the N/C Headwall, I’d want better conditions for my first time down. The last time I’d done the Wy’east face was during the wintertime with my buddy, Rich. That tour turned into a bit of an epic, due to icy conditions and running out of daylight (trip report here). Between the suboptimal conditions and only making it up to ~10,000’ on that tour, I was not too bummed out about the thought of skiing the Wy’east face again.


At ~8,300’, the snow on the ridge became too rocky to skin, so we traversed onto the snowfield to the west, where we were able to continue up on skis. It was at this point where the snow started to firm up the higher we climbed. Eventually, at ~9,000’, the slope became too steep and icy to skin comfortably. Therefore, we strapped our skis to our packs and put on our boot crampons for the remainder of the ascent.


As with the conditions we’d encountered the week before on Mount McLoughlin, the storms throughout May had negatively impacted the corn cycle, and in this case, we found a crust on top of wet punchy snow. In some spots this made boot packing quite a chore, sinking up to my knees in some portions of the climb. I was actually more worried about what the skiing conditions would be like on the way down, once the sun had melted the crust.

The higher I climbed the better the snow conditions became, with a nice corn consistency where I topped out at 10,650’ -- a nice flat area on top of the ridge leading toward the summit. Positioned above and between the Steel Cliff and Devils Kitchen Headwall, I had a great view of all the climbers heading up the popular South Route. It looked like a line of ants ascending the Hogsback/Pearly Gates, which made me appreciate the more secluded line we had chosen. Of course, we were not completely alone, and soon after reaching our high point, another couple reached my position. It was nice to have a pleasant conversation with them while waiting for Andrew, especially during this time of limited public interactions. They had come up from Timberline Resort and had also planned to ski the Newton/Clark Headwall, but after communicating what we had seen of it on the way up from Meadows, they opted for the Wy’east Face as well.


Before long, Andrew came into view and was pretty happy (like me) to have reached the drop-in. Soon after he had shown up, a cloud band moved in, engulfing the summit of Mount Hood. What I didn’t know at first was that this was the formation of a cap cloud - basically, a stationary cloud formed by the cooling and condensation in moist air being forced up over the peak. It created a pretty intense wind tunnel that eventually took over our location as well. We quickly readied our gear so that we started descending before we lost all visibility.


I dropped in first, and by the time I did so it was pretty windy and hard to see -- I was really glad we had decided against descending the N/C Headwall. The snow was decent up top but soon became pretty grabby and more difficult to ski. At one point we had to decide which side of a rock outcropping we should descend. After choosing the skier’s left side, Andrew headed down and quickly discovered a crevasse. Luckily he didn’t get swallowed by it and was able to traverse over to the right side, which was free of cracks.


Once below the cloud cap, the wind died down and we had full visibility. The snow became even softer and we started to kick off some rollerballs, which was pretty crazy since it was barely 9:30am. Surprisingly, and as we descended further, we found about 1,000 vertical feet of really nice corn snow. We took full advantage of this and milked as many turns as we could.


At around 9,200’ we started traversing back toward Mount Hood Meadows. Although the snow was starting to get pretty wet at this point, we were still able to get in a couple more series of fun turns. Looking back up the mountain, the cloud cap was pretty impressive and I wondered how it was affecting all the climbers that had been on the summit -- I certainly hoped they’d all be able to make it down safely.

As the top of the Cascade Express lift came into view, we found ourselves carrying our skis over a band of rocks that split the snowfield we were on from the one that dumped into the resort. Luckily it was only a short carry and before long we were back on our skis. The ski down through the resort was fairly uneventful but did provide lots of low angle turns, and it was certainly better than hiking down. The snow surface was pretty dirty and it was difficult to maintain our speed on the flatter sections.


Eventually, we reached the lift tower where we had left our shoes. I quickly grabbed mine and skied the short distance down to the parking lot, while Andrew decided to start the hiking process from the tower. Hiking back down to our car, we saw lots of other people heading up to enjoy the freshly opened mountain. Andrew was able to get a car ride back down to where we had left his car, saving us two miles of hiking down the road. Once we had everything loaded, we celebrated over a beer and started the drive back down south.

Conclusion:
It’s an understatement to say that Mount Hood is a very special mountain, and there is a good reason why it draws so many people. It’s extremely aesthetic and also happens to be the tallest peak in Oregon. That said, the south side has been loved almost to death and I have little interest in visiting that side of the mountain, especially on the weekends. Luckily there is a lot of other avenues to access it, with the east side, above Mount Hood Meadows, being the next easiest. Since we didn’t bag the Newton/Clark Headwall, I can’t speak for that line, but the Wy’east face provides a 2,000’+ wide open face with a slope angle starting around 40° and mellowing out to around 30°. Since it is wide open, it’s pretty featureless, which is the norm for most of the popular volcano descents in the PNW. As much as I enjoyed our day ascending/descending the Wy’east Face, my primary target will once again be the N/C Headwall the next time I head up there.