The O’Leary/King Castle Loop is a fantastic adventure ride that will kick your butt and reward you all at the same time. The variation that we chose equated to ~28 miles and ~5,700’ of climbing -- since our ascent was on a mix of paved and gravel roads it wasn't all that bad. When I say adventure, what I mean is that the trail is definitely overgrown and rough in spots, but this actually adds a bit to the charm, like some of the sections on Bunchgrass/Heckletooth, which it actually reminds me of quite a bit. One of best things about the trail is that it ends on King Castle, one of my favorite descents in Oregon and guaranteed to put a smile on your face. 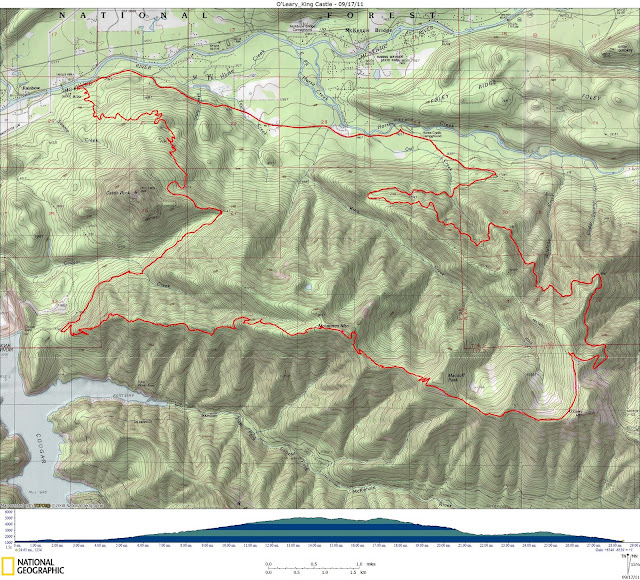 The tracks from our ride, which can be
downloaded from Garmin Connect, here.


This was actually the second time I had ridden this trail. The first was last year, around the same time, with my wife Emily and our good friend Brad. I wanted to put together a ride report back then but I just got too busy and it slipped off my radar. This time around Emily and I didn’t have any other takers, but we were still committed and decided to just do it as a duo. On a side note, many of these pictures were from the first trip since I didn’t take too many pictures on this years' ride.

Our ride started out from the small parking area at the bottom of the King Castle trail. From there we rode east on King Rd, a nice paved warm-up with good views of the Three Sisters. After about four miles we tee’d into Horse Creek Road, where we headed southeast a short distance to NF 1993 where we began our climb to the start of the O’Leary trail. Luckily, NF 1993 is mostly paved (with some sections of gravel), which made the long sustained climb at bit more bearable. I know some people actually climb Olallie trail instead, which to me seems masochistic, but I guess it depends on how good of shape you’re in. Basically I just fired-up my iPod and took it slow and steady. At around the 12.5 mile mark we turned right on a gated gravel road that headed straight up the side of the mountain. Eventually it flattened out where we looked for our first opportunity to do a short bushwhack over to the Olallie/O’Leary trail intersection and the start of the singletrack -- a GPS is really helpful for this. 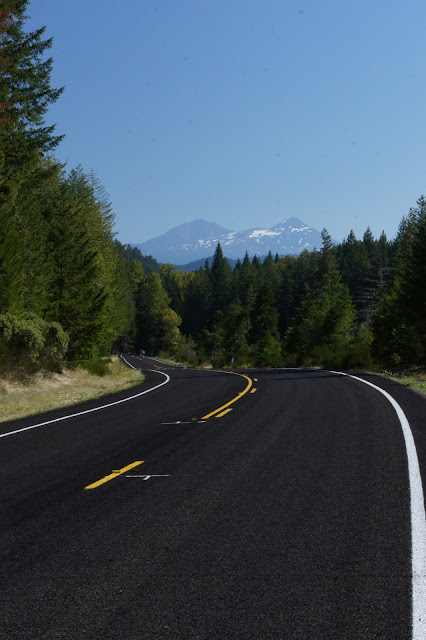 The spin on King Road 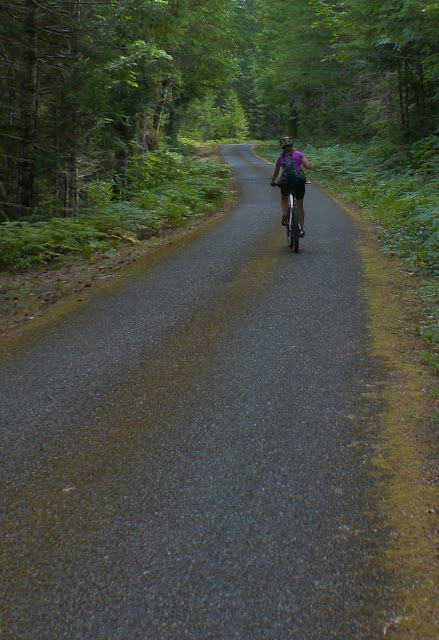 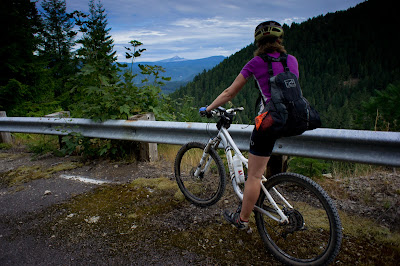 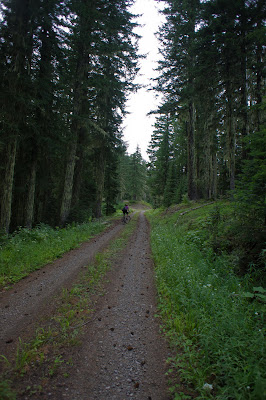 Climbing the last bit on the spur road off NF 1993


Even with a majority of the climbing out of the way, the hard part had just begun. The next 4.5 miles would consist of riding west along the ridge on a trail that has all but gone extinct, at least in some sections. It does open up in parts but never really gets “flowy”. Once again, this is what gives the trail its adventurous feel, and the wildflower and overall mountain scenery make it well worth the effort. That said, if more people would begin riding this trail (which they should), I don’t think it would take that long to clear a better path, making it much more rideable. 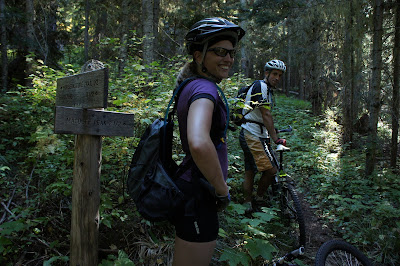 At the trailhead of the O'Leary Trail 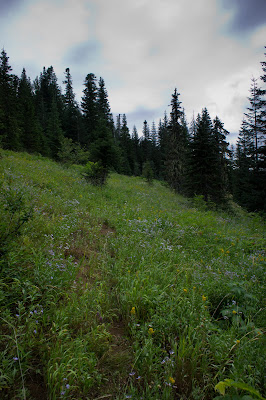 There must be a trail through here somewhere... 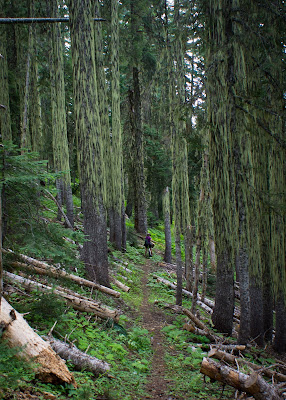 Bearded trees on the O'Leary Trail 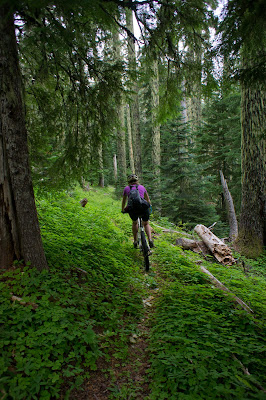 Lots of clover on this one 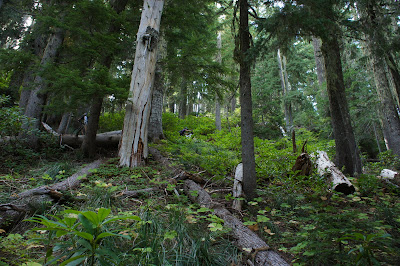 The brutal hike-a-bike climb to the top of McLennan (or Macduff?) 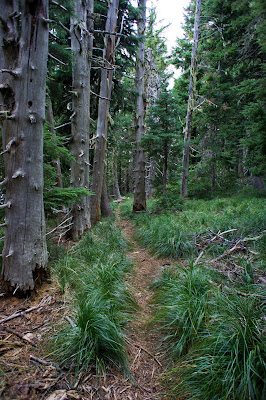 
The last bit of this tough part is straight up some pretty steep switchbacks, making it essentially a hike-a-bike section. We finally topped out at around 5,000' at the best overlook of the ride, Macduff or McLennen , depending on who you ask. Technically McLennen is correct, but a historical plaque for Nelson Macduff is located there, creating lots of confusion as well as some controversy. I'll let you decide what you want to call it, and if you're interested, here is an old newspaper article which goes into greater detail: 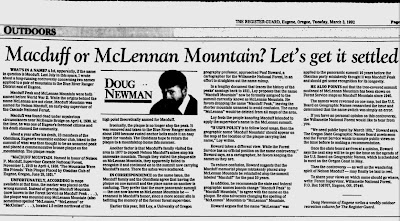 
Regardless of what it's called, it offers a great view for all your hard work. At this point we were both pretty hungry so we also used it as our lunch spot. With the high clouds hiding the sun, the temps were a little cool to stay for too long. 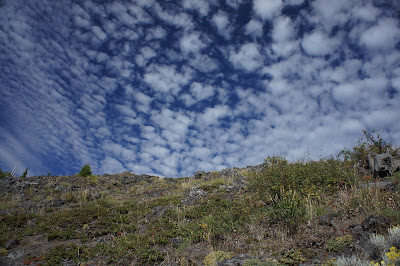 A quick climb to the overlook

Emily enjoys the best view of the ride 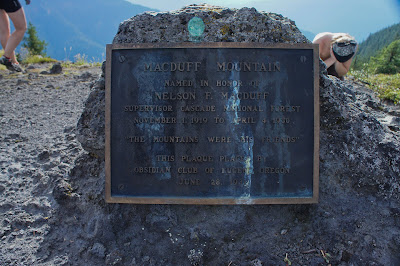 
From this point on the trail becomes much easier, with a nice clear path that contrasts with the first half of the ride. Furthermore, it's almost all downhill from here, excluding a couple of short ups. It should be noted that at one point you'll come out onto a road which you'll need to ride for a ways before you jump back onto the trail -- just keep your eyes open for where it drops off to the left. A couple sections of the descent are actually pretty steep with tight switchbacks and pitches that will have you sitting on your back tire. The last major pitch reminds me quite a bit of the ones on Eula, and is probably my favorite part of the O'Leary trail. Soon we could see Cougar Reservoir through the trees, signaling that we were almost to the Castle Rock intersection. 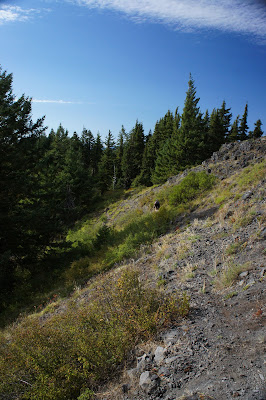 Starting our descent after a quick lunch break 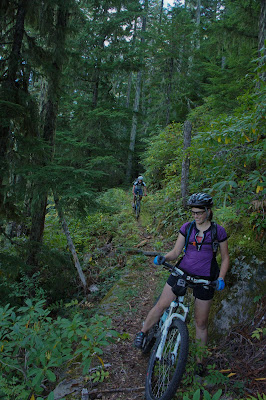 Emily checks out the rock work by the CCC 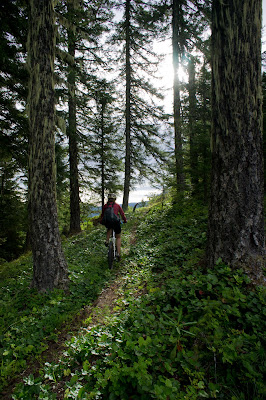 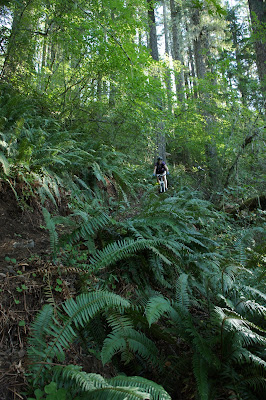 Some steep switchbacks on the descent 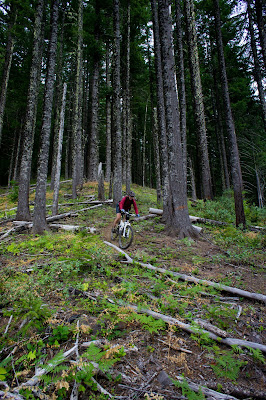 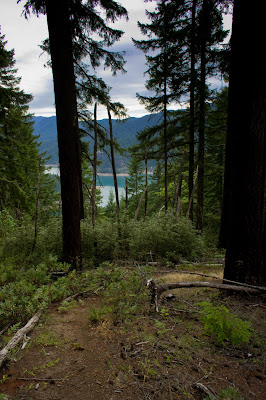 A view of Cougar Reservoir through the trees 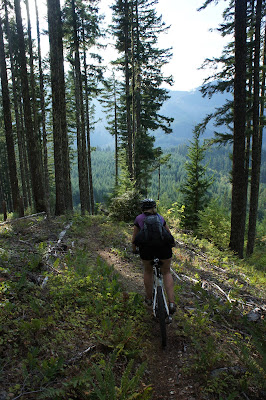 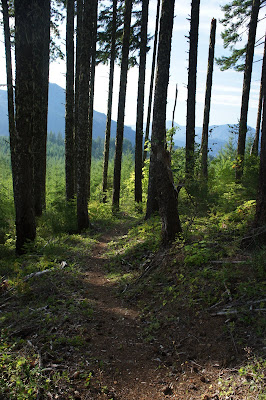 
Once we reached the intersection we made a hard right onto the Castle Rock Trail. This is actually a 3-way intersection which is signed incorrectly, just make sure you head northeast. This trail was in great shape, and much better than last year, thanks to some young trailwork volunteers. It does climb gradually over its 2.5 mile length, but it's almost unnoticeable. 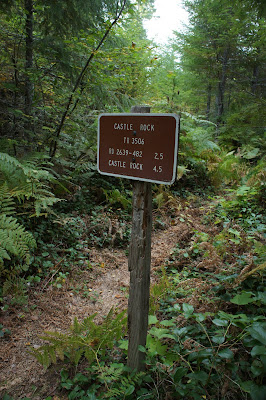 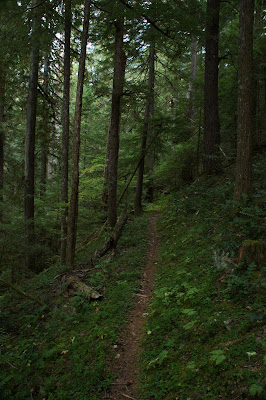 Somewhere on the Castle Rock trail


Soon we reached the road that climbs up toward Castle Rock and is used as an access road for the King Castle Trail, and as stated before, one of the best descents in the state. The only thing that stood between us and this beautiful piece of singletrack was "The Demoralizer", a name I've given to this steep section of the road which seems to beat me down a bit every time I ride it. I was pretty glad that we weren't planning to do the top section, which would have added another 800' or so of climbing. Don't get me wrong, it's worth it if you're not already too beat-down. 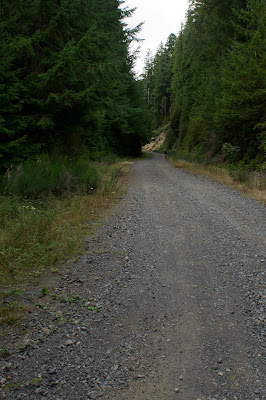 One last climb up The Demoralizer


The ride down King Castle only took us about 10 to 15 minutes -- in comparison to the earlier day's riding it felt like a sidewalk, with a buffed surface and banked corners to rail. You can build up some scary speed on this one, but it's fairly wide open so there is little risk of scaring hikers in most places; however, there are some blind corners to be aware of. By the time we reached the car we had been out for almost 6 1/2 hours and built up quite an appetite. We quickly loaded up and headed back to Eugene for some good ol' Thai food.

Conclusion:
This trail needs to be ridden more often to break it in. If not for the first part being so rugged it would be one of the more classic rides in the area. Even so, it's still a great trail, with some interesting history, amazing rock work by the CCC, and excellent scenery. Go check it out for yourself and be ready for a workout!

Tracks from our ride:


And, our tracks from the full Olallie / O'Leary Epic, recorded on a latter ride: