After completing the Triple Crown of Smith gorges, we loaded up and started heading back to Patrick Creek to find camp for the night. Chris (who boated the gorges with us) had said that if we drove up Patrick Creek that we would find plenty of good spots to choose from. As it turns out his beta was spot on, and we only had to drive a mile (or less) before we found a nice riverside area with a large grassy field and some good tree coverage. I was happy about being next to the river since listening to it always makes me fall asleep easier, when the time comes.

Bob, Aaron, and I quickly went to work gathering firewood while Eric setup the kitchen, which he had provided. Gathering the firewood was not an easy task, there was plenty of it, however it was pretty wet from the recent rains. At this point I was kickin' myself for not picking up a bundle of firewood (or two) from the gas station in Gasquet. Darkness was starting to set in, and after gathering what we felt would be enough for the evening, we went through the process of breaking it up into manageable sizes and stripping off the wet moss. Before we knew it, Bob had got 'er started with a small flame and a lot of smoke.
At this point, the three of us sat down and tried to enjoy the fruits of our labor while Eric slaved away on dinner. His efforts would not go unnoticed, as we all enjoyed a healthy serving of spaghetti with marinara and spicy sausage. Damn, it was good after a day of boating!
About this time the fire started to build and we all took turns telling stories and watching cowboy T.V., the fire on channel one, and the stars on channel 2.
After some good laughs and a couple of beers (or the other way around), we each dispersed to our bedrolls for a good night's sleep, and good it was.

The next morning, I awoke to the sounds of cracking sticks, which I thought at first might be some animal eating food we must have left out. After a quick peek out the zippered door of my tent, I was relieved to see it was just Bob trying to stoke the fire back up. After throwing on some clothes, I joined him, along with some heavy morning fog and a thick layer of dew over everything that wasn't covered.
A couple of yawns and stretches later, I started putting together breakfast for the troops: scrambled eggs and sausage links. The smell was enough to pull Aaron and Eric out of bed, and they started making coffee. After finishing our meal, we started packing up so we could get to Barefoot Brad's house for our scheduled shuttle ride at 9am.

After the short drive to Gasquet, we pulled into Brad's drive. His house is pretty obvious, just look for a one-story castlesque house with a suit of armor proudly displayed the front middle bay window. For the record, Brad is one of my favorite shuttle drivers; he's reliable, knowledgeable about the area, and is just an all around good guy. I've been using him for many years and hope to for many more. Eric was the only one in the group who had not yet met him, and after some "good to see ya's" and "nice to meet ya's", we were on our way to the put-in. Luckily, snow was not an issue for the ~20 mile drive on dirt roads through the Siskiyous. It should also be noted that even when there is snow, Brad is the one who clears a path. He also cleans up all the trash left on the sides of the road, and even is the one the posts the levels for the NF Smith on the Dreamflows website. As he says, "This is my office, so I have to take care of it". Although, even if he wasn't doing shuttles, I think he'd do it anyhow, he's just that kind of guy. 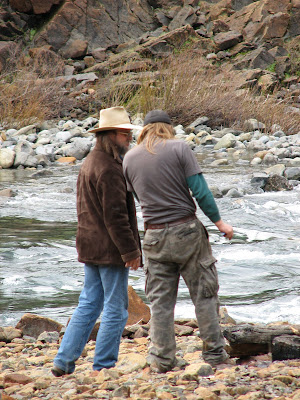 "Barefoot" Brad (left) and his counterpart
Dale when more than one shuttle rig is needed
(photo by Brad Bassi)
Once at the put-in, we quickly unloaded our gear and got changed into our boating attire. Brad, sat on a rock, smoked a cigarette or two, and enjoyed the view from his office window. Once we were all geared up, we bid our farewells to our trusty shuttle driver and set off on our way. After floating down only a couple of hundred yards, Eric started yelling that his thigh hook had broken loose and he needed to pull over to check it out. A quick assessment determined that he had ripped the bolt completely through the side of the boat! He said he must have done it "loopin' on Bob's face", whatever that means. This was going to require more than just a quick fix, so we quickly scrambled to shore and blew our whistles to get Brad's attention, hoping he hadn't driven away already. Luckily, he was still in the parking area, and Eric was able to steal a bolt from his truck and jerry-rig the thigh hook back in place. After about 1/2 hour of tinkering we were back on our way down the river.

As we had projected, the level was on the medium-low side and the first couple of gravel bars were pretty scrapey. Even so, there was still plenty of flow to have a good time, and the NF is a trip done more for scenery and the wilderness setting than exciting whitewater. However, it's still class 3 with a couple of 4ish rapids thrown in , and when the water is high it turns into a classic big water play run (above 3000cfs). On this trip down we had about 1200cfs: 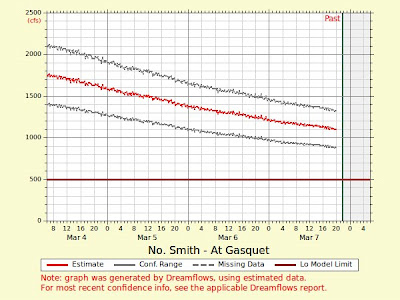 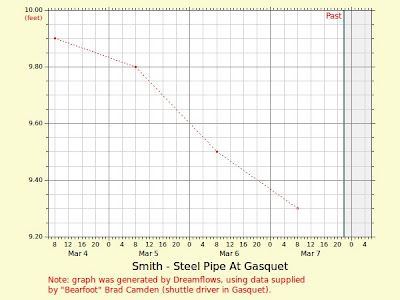 NF Smith Gauge (steel pipe)
It should be noted that if you did run into problems, a hike out would be a real undertaking, and for that reason alone, it may not be the best place for timid class 2/3 boaters. Actually, my first time down I was just that, along with my two companions Jason and Lanny. Somehow we made it down without issue, which I'm sure was partially due to the relatively low water (under 1000cfs if I remember correctly). Brad actually drove directly to the takeout and waited for us. He mentioned that we looked pretty "green" and was prepared to come look for us if need be. That was an exciting trip indeed. 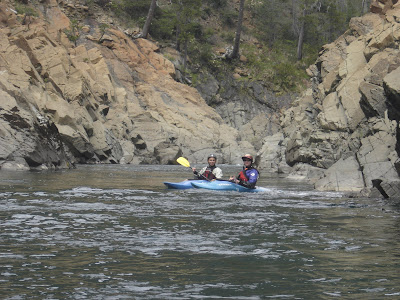 Jason (left) and Lanny on our first trip down the NF Smith
(Look at the fear in their eyes)
After a couple of miles, Diamond Creek pours in from the left at a right-hand bend. Supposedly this is a great alternative (class 4) put-in to the one we used, but Brad said that it didn't have enough water, and since the Biscuit fire, access may be an issue due to downed trees. Diamond Creek also marks the point in the trip where the walls start to gorge up a bit; the color of the rock walls along with its jagged nature make it feel unearthly. It's truly an amazing place, and you feel far away from the daily grind. 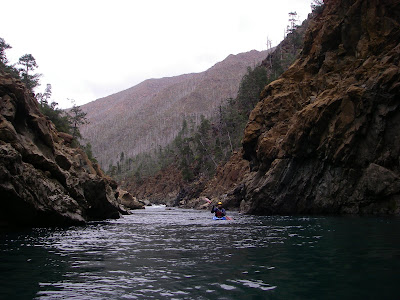 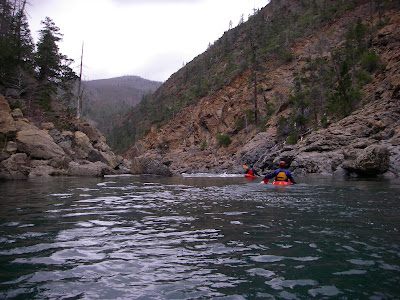 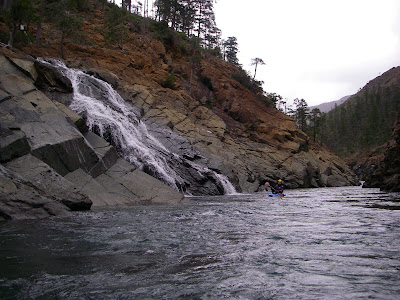 The author paddles past one of the many
side creeks that cascade down the walls
(photo by Eric Emerson)
Another thing to keep your eye open for is Darlingtona, or "pitcher plant". This is a carnivorous plant that feeds on insects that get caught in its trap. It is native to Northern California and Western Oregon, and on the NF Smith can be seen hanging from the walls where water is feeding in. This is a rare plant and it's just one more treat this river provides. 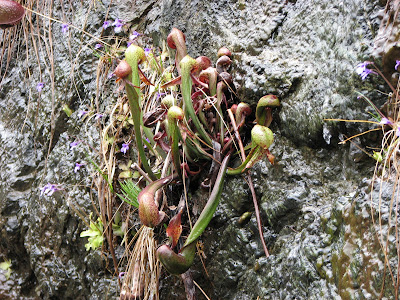 Darlingtona, or "pitcher plant" hangs on
the wall below some cascading water
During our ~15 mile float, we stop to have have lunch where a creek comes in from the right at the end of one of the tighter gorges. It was a great place to get out and stretch the legs, and just enjoy being away from it all. After 15 to 20 minutes we were back in our boats and headed downstream. 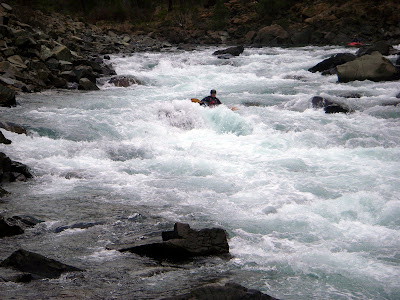 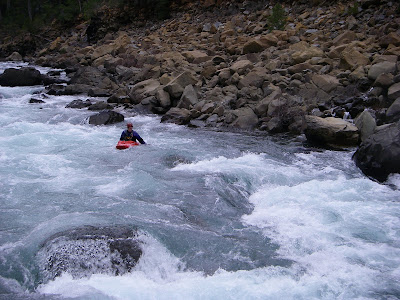 Aaron hand paddles though a rapid on
the lower stretch, which he did all trip
(photo by Eric Emerson)
After stopping at a couple of playspots (surf waves/holes) and negotiating some more class 3 rapids, we got to the bottom couple of miles where the river flattens out a bit. The canyon walls open up, and civilization comes into view (by way of homes on hills and stairs down to the water). Soon after this, the steel pipe gauge appears on the left marking the takeout (which was reading 9.25'). We all shouldered our boats and hiked up the rocks to where Eric's truck was to be left. Just as I summited the cliff, Brad came walking down the path toward me; he had just arrived with the truck, talk about prefect timing!

After loading up and saying our goodbyes to Brad, we jump in the truck and started the long journey home. We pulled up to my house around 8pm and sorted gear, which is always fun in the dark (hey, have you guys seen my...). Once the gear was put away and the fellas had left, I walked in the house to see Emily, the two dogs, and the cat. Although it was another great trip down to the Smiths, it was good to be home with my family...
Posted by Nate Dogg at 7:28 PM