Black Rock, OR (In Lycra) 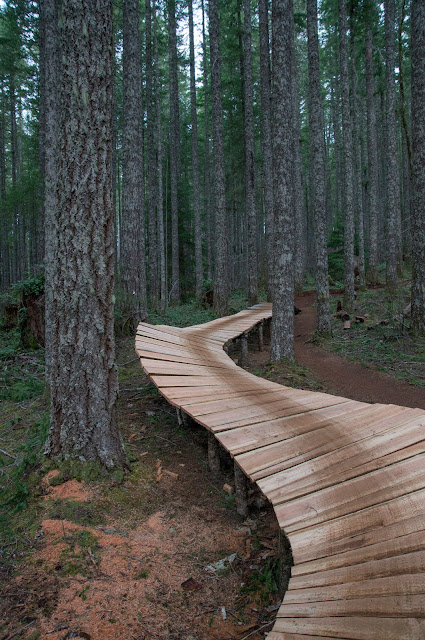 With no real kayaking options due to unseasonably dry conditions, it looked like I would need to turn to one of my other outdoor passions for the weekend. Since my wife, Emily, will jump on any opportunity to go mountain biking, I knew it wouldn't be hard to convince her to hit the trails with me. I was actually thinking it would be fun to head to Black Rock to play on some of the freeride trails, and when I mentioned it to Em, she was immediately on board. You see, she and I head to Squamish/Whistler (BC) each year for our anniversary to mountain bike for a week and half, and although we're XC riders, we love all the technical and freeride style trails the area offers. With that, Em sent out the open invite to our other XC buddies to see if they wanted to shred with us, on some of the easier trails that Black Rock has to offer.

With a crew of 11 strong, we headed north on Sunday morning, clad with lycra, styrofoam helmets, and clipless pedals -- perfect for a day of shreddin' freeride trails! As we made our way along I-5, the morning fog started to give way to sunny skies, and I knew it was going to be a good day. By the time we reached BR, it was around 10:30am, and after getting suited up, we started our ascent up Mt. Brown.


Our first stop was at Basic Training, to get in some practice before hitting the trails. This would also give those in our crew who hadn't done this type of biking a taste of what was to come. The most popular section of Training Ground, for our group, seemed to be the jumps/small pump-track features. We hadn’t even gotten on the trails yet and already folks were grinning ear to ear as well as hootin’ and woohooin’ -- I felt like I was back in grade school again, playing on my old BMX bike. I also decided to play a bit on the skinnies, which I also have a fun time with up in BC. I was certainly a bit rusty, and took a couple spills just getting onto the damn things.

Once we had been trained, we started the grunt to the top of the hill. With only about 1,400’ of vertical climbing over a few miles, it’s not too bad of a climb, unless of course you’re out of shape, like me… My legs and lungs were definitely feeling it, but I was able to mosey along at a fairly steady pace, only stopping a few times to catch my breath. Along the way, off to the sides of the road, were manmade stunts that were certainly impressive to look at, but way out of my league – you want your big boy pants and not your Styrofoam helmets for these ones. There were a few groups of riders getting ready to session them, as well as others that were doing trail work. As we passed by, everyone waved and were very friendly/welcoming to our crew. Eventually the road ends at a winding trail that continues up, but don’t fret, you’re almost there. Before long we reached the peak, where a conveniently placed bench and bike stand presented themselves, allowing us to take a bit of a break and eat a snack.

The first trail that we decided to ride was Bonzai Downhill (BD), the easiest rated trail in the network. Although it contains numerous dirt and wood structures, they can either be rolled or ridden around, making it a great introduction to more novice riders. BD is also broken down into multiple sections (BD1 through BD5), and each section has its own flavor. The first section heads down the hill in a hurry, with sweet berms made from dirt piled high, and even one bolstered with wood planks; there’s also a fun skinny to hit if you so choose. The last feature on BD1 is a super cool wood ladder bridge, which zigzags before dropping down to the first road crossing.


Once past Plankenstein, the trail descends down the mountain with lots of dirt jumps and a few wooden stunts thrown in for good measure. To be honest, I don’t remember which stunts were on which sections of Bonzai Downhill, I was having way too much fun to pay attention. What I can tell you is that the features are very well built and have great flow, allowing you to hit them at speed, or simply roll them if you choose. All too soon, we reached the road, just down from Basic Training, and everyone had such a good time that we decided to head back up for another lap, which was just as fun! I must say, the last time I had ridden this trail was about 4 years ago, and the improvements that have been made are really remarkable. The BRMBA crew really deserves recognition for what they’ve put together -- Bravo! Here are some pics taken from different sections of BD.

Even after 2 laps on Bonzai, we were having too good of a time to stop, so we decided to head partway up the hill and drop in on the lower part of Sickter Gnar. Once again, we were treated to lots of fun jumps and pump-track style riding. There were a few larger stunts, but each had easy ride-arounds, making also it suitable for XC folks. The last section of Sickter, just above Training Ground, is a little more rough than the groomers above, and reminded me more of the trails we typically ride. At the top of it is a steep/chunky pitch, which goes fine, and then the trail meanders its way through some technical sections, before dead-ending in the middle of Training Ground. Next time we ride at Black Rock, I definitely want to ride Sickter Gnar in its entirety – I can only assume that it’s just as quality as the other bits of trail we had ridden that day.

By this time we had done ~3,200’ of climbing, and most of the group was feeling pretty tired. With that, our attention soon became diverted to food (and beer), so we decided to head back to the car and find something to eat. To do so, we used the last section of BD, which starts just down from Training Ground, and ends at the road, not too far up from the parking lot. Back at the car, we enjoyed some refreshments, supplied by the great Davey Sprockett -- thanks buddy! From here our crew split up, with a few of us heading into Corvallis to grub on some Mexican food and reflect on a great day of shreddin!

Summary:
Black Rock is awesome! Don’t be deterred from going there because you’re a XC rider. Bonzai Downhill is completely appropriate for small travel (or even no travel) bikes, it will only limit how big you want to go. Furthermore, the section of Sickter Gnar that we did was also Lycra friendly, and only a minor step-up from BD. This is not a trail system I’d travel for every weekend, but I’d certainly head there a couple times a year for a whoopin’ good time! Once again, BRMBA deserves a huge amount of praise for the work they’ve done, building high quality trails for riders of all skill levels!
Posted by Nate Dogg at 6:57 PM